So, I went out and bought a whole lot of different wheat-less flours due to the fact that I can not have a regular wheat flour. I can’t have wheat. Period.

After looking at a gluten free/vegan bread recipe, I wrote down what I would need and here is the list:

All of these are not yet very familiar for me, I’m still a student and at times very confused. All of a sudden I have these flours instead of just one that I have always used. Anyways, my first experiment was Buckwheat crepes. I’m very good at making crepes because there was 2 years where I made them every morning so I thought I will not use a recipe but still did a little bit of goole-ing.

There was a recipe on internet where it said to add potato starch so I did. Otherwise I would of never but this time I decided to do it. But don’t. I think it is better and more liquidy without it.

I mixed in all the dry stuff and then added the rice milk and coconut oil with the electrical mixer. All done! 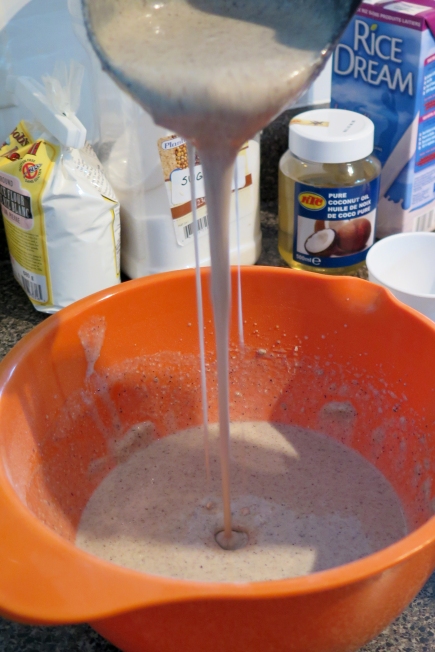 Fry both sides till yellow/golden brown.

I served it with banana, berries and maple syrup. With the maple syrup you can’t taste the buckwheat a lot but eating it without the syrup and berries you can taste the buckwheat really well. It was very good! I will make these crepes again, for sure. But I will not use potato starch. I never heard before that you need to use something thickening in your crepes. Strange. I can’t believe I added that 🙂

My husband is supporting me 110% with all this and he was very impressed with these pancakes. He ate a lot of them! That says it all.

“Eating IN is the new eating OUT” our friend said couple of days ago, but we have known that for years.

We really like and enjoy to cook and eat at home. We just love everything we make, well except the times when the food is too salty, burned, lumpy, too watery, too thick…you get the picture :)

We are not perfect but we learn from every experience.